Providing a compact and accessible overview of the status of a project is very important for a production team. And it's quite a challenge, since almost every team member has a different angle when viewing or thinking about the status of the project.

Today we are sharing Watchtower: a visual film production tracking tool. Watchtower helps visualizing the status of a short film, episode or film sequence and unpack as much information as needed, down to the duration of a shot and assets used in it. All in the space of one screen. 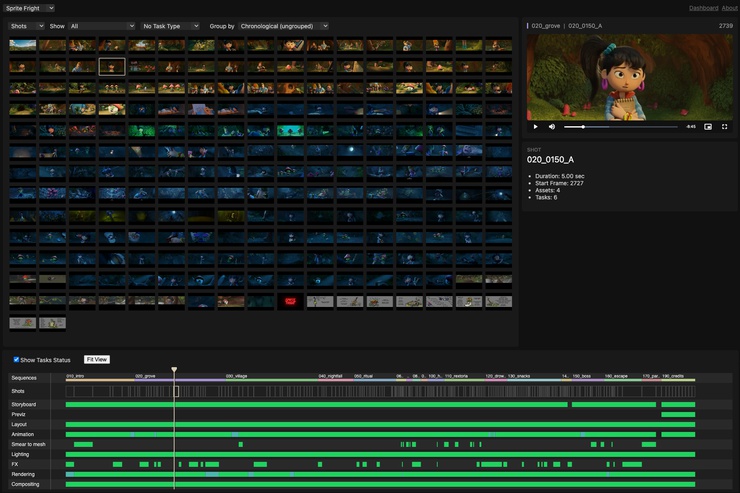 Watchtower was developed during the creation of Sprite Fright, originally as a Blender add-on called edit-breakdown, and subsequently as a web application. You can check out a live demo, and a features overview right here.

How does it work?

Watchtower is a web application that can fetch data from a live Kitsu web API or from JSON files, allowing it to be used in a production environment with user authentication (Kitsu server), or integrated with other task management software via JSON data interchange.

Watchtower is tailored to display the edit video in sync with data for shots timing information, their grouping in sequences, assets and their usage in shots, task types and their completion status and assignee per shot/asset.

Detailed instructions on how to deploy Watchtower are available in the README.md file.

The grid-paradigm has proven itself quite powerful, and could be explored as a UI option for other tasks as well, such as render management. Next up is a workflow for creating and editing the shot data from within Watchtower, as well as casting assets in a fast, visual and interactive way.

Special thanks to Inês Almeida for co-developing the prototype and for the web rendering backend. Thanks to Pablo Vazquez for UI feedback and contributions.

If you have feedback or suggestions, reach out here or in the repository. Enjoy Watchtower!

great tool ! Very similar to RAMSES (https://rainboxlab.org/tools/ramses/), also open source and soon to be available for Blender. Your system looks quite simple (at first). Keep in mind to keep it simple to help small projects to stay organised, like student projects or one person films. Frist thing to improve would be to integrate that perfectly in Blender, like the "project window" in Maya, and make it work offline, on a single computer, or link it to a cloud service for blender subscribers?

Need a video to show how to install this i reckon...

all I get is this:

It looks like your setup is querying a Zou server. Could you share the exact steps you followed?

Hi, this version is already full and ready to use, or it's just developer build? Thanks for answer)

@Andriy Pryhoda This version of the software was used in production. Some tweaking is still needed to have a nice out-of-the-box experience, and you can follow the progress on the repo.

Hi. I want to use the watchtower but there is no good tutorial from start to end. I use windows 10 and i couldnt find any installation file. Can anyone help me? Thanks.

@Lagari Hi, could you try to have a look at this and let me know if that helps? https://gitlab.com/blender/watchtower/-/tree/master/pipeline