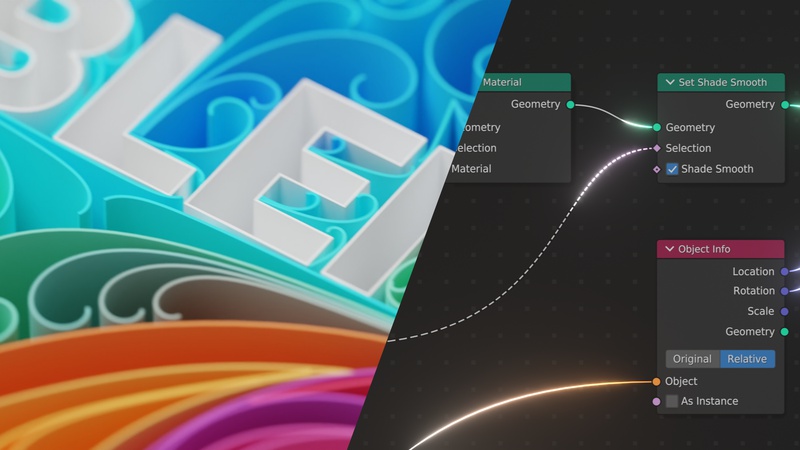 Last week was a big milestone in the history of Blender with the release of 3.0!

For every major release, Francesco Siddi edits a reel that showcases the new features and highlights artwork from the community. This time, for 3.0 we wanted to go even further and add customized titles and motion graphics to the show.

I absolutely love making motion graphics, especially if they can be rendered in Eevee in the blink of an eye! The titles of the individual sections were meant to hint at the features themselves, so that gave me the chance for some more elaborate animation and effects.

The UI sections show the improvements in clarity between Blender versions and had to transition from the old style to the new in a fun and dynamic way. I started off by tracing screenshots with curve and mesh objects and slowly assembling nodes and UI panels.

In addition to that we were tasked to provide titles for the "Blender is..." video publication. I grabbed Simon Thommes, who was at the time buried deep in the creation of the Asset Demo Bundle and started brainstorming. The general idea was to create a fun and uplifting title graphic that shows the creativity and diversity of the Blender community without becoming too generic and boringly corporate like these kind of titles tend to be. We came up with the idea of colorful paper-like spirals that form the title — roughly 20 hours before the video had to go public!

Racing against time, I started off with a rough curve design layout in Inkscape. Meanwhile, Simon created the node based machinery that would enable us to not only place a variety of spirals and circular shapes in 3D space, but also animate them into being. Then, Simon filled the layout with spirals while I figured out the camera moves to sync to the music. The spirals are colored with a nifty setup Simon came up with that allowed us to color them from a single image texture which could be painted from within Blender. The final sequence was rendered on a single computer with CyclesX in roughly 10 seconds per frame.

So great to see all the possibilities of GN!