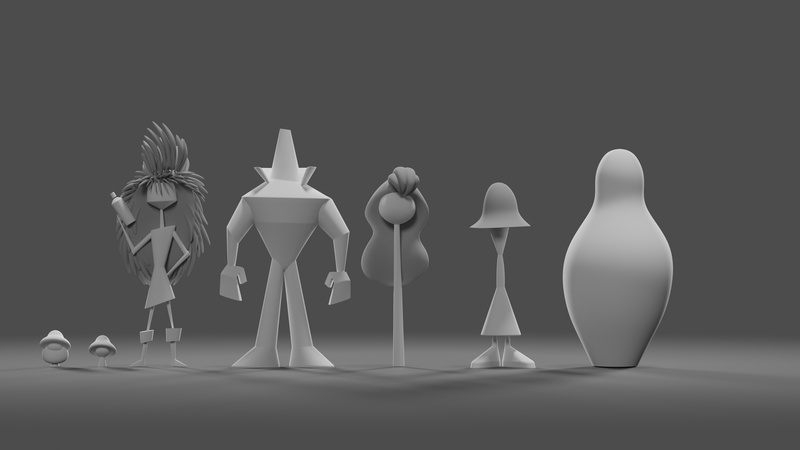 For Sprite Fright we went for a much more simplified and exaggerated style than ever before. Here you'll find key design principles we used, especially during the character creation.

Director Matthew Luhn brought a lot of inspirations into the art style.
But one of the key topics was the miniature look.
It's something we kept subtle. This wasn't meant to take place in a toy diorama.
But every asset went through a Chunkification process.

Ricky Nierva, our production designer also provided us with a key framework called "Simplexity". In his words:

"That is the art of simplifying an image down to its essence. But the complexity that you layer on top of it – in texture, design, or detail – is masked by how simple the form is. Simplexity is about selective detail"

You can see this philosophy applied everywhere. In the modeling, shading, grooming & animation. Every bit of detail & movement is trying its best to preserve the original shape language.

But you don't just get inspired by what you can do.
What you cannot do will also heavily inspire the art style! Sprite Fright was the most ambitious production we ever had. With ambition comes a need to cut corners. So early on we decided:

So all clothing needed to be snug on the body. This lead further to the rubber-hose animation style.

For a while we aimed at textured models and cards. This changed later on but we still kept the strands thick & simple as a result.

They were also instead rigged to give the animators more control.

The textures & shading were kept minimal. So the sculpted shapes were the strongest visible design aspect.

Again to avoid distracting surfaces & highlights. Even the eyes only had one animated highlight.

So with all of this the entire art team sprang to action ... and we still went way too complex. We couldn't stop ourselves from overthinking details. From discussing how big the seams on Ellie jacket should be or how many rubber bracelets she should have. Or the amount of cool 80s designed pins on her outfit. Don't focus on all the details too soon!

All of these nuances added nothing in the big picture. It doesn't matter if this is our main character. We needed to roll back to something simple! Get back to strong shape language with details that don't undermine that!

To take Ellie as an example again, we completely redesigned her. But we almost fell into another trap: A spherical head is not a sphere! It's tempting misinterpret the Simplexity principle as "Start with a simple shape and whatever you add, never change the original sphere". But this is almost never true in practice.

A thought I came back to often is: There's no such thing as a "Simple" character. Character Design is difficult for both realistic & cartoony characters. The challenges just lie elsewhere.

So where does that leave us? How do we compromise?

Aim for Appeal Instead

You can't get around the fact that we look for certain anatomical features that make characters human. A sphere is not human. The same goes for other simple shapes. So go for complex shapes that appear simple!

This means cheating a lot. For example Ellie has certain features that make her appealing:

But that's just the original shape. When animated there is more at play to keep the style consistent and appealing.

The mouth expressions are always facing the camera. They also slide across the face to not change the head shape. Cheated perspective and the "cutout-mouth" was also often used.

The teeth are round by default but are able to change their shape depending on the expression. Square for closed teeth and sharp for evil expressions

We never do any actual compression of fleshy volumes. Instead we draw fake wrinkles on the surfaces to keep it simple. The animators have full control over this.

So let's have another look at that quote from earlier:
"... the complexity that you layer on top of it ... is masked by how simple the form is. Simplexity is about selective detail"

But what I realised only when applying this principle, is that it goes both ways!
You need to selectively add complexity to also make the simple form believable.
All of these little compromises and cheats are necessary in selling the illusion that it's all simple, even if it isn't.

Thanks a lot for reading. If you have any more questions don't hesitate to comment below. For more on the animation style check out the production lessons and blog article on the style guide.