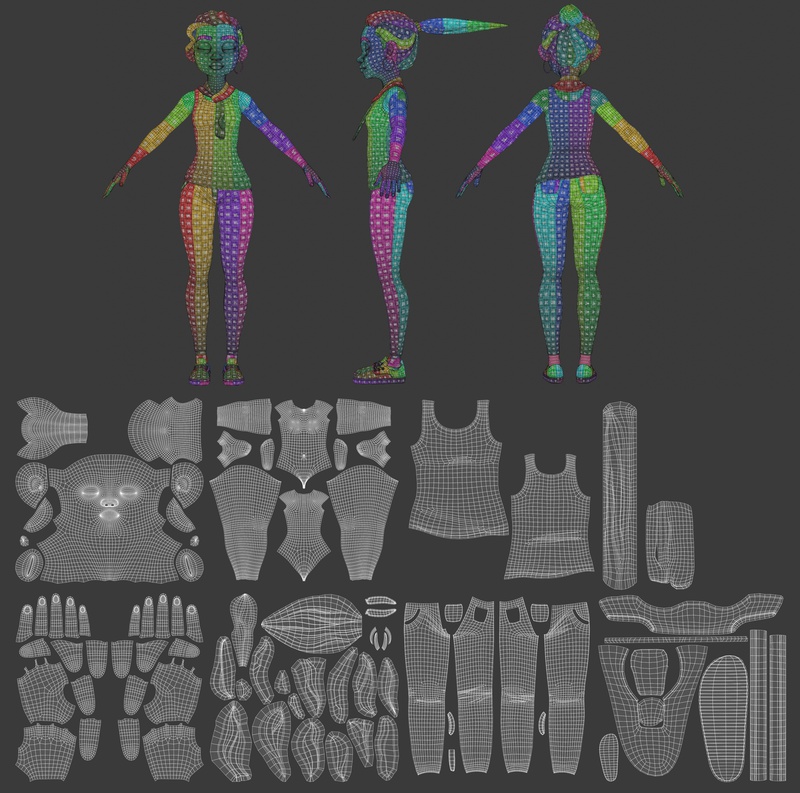 After I was satisfied with the topology I went in and started adding seams and unwrapping every object. In general I tried to keep the UVs as symmetrical as possible to make it easy to mirror over changes in the UV map and textures.

For the clothing it was important that I could just add a fabric pattern and it would follow the topology of the model. This quad-like wunrapping of the UVs helps save a lot of time during texturing/shading. To make this happen I used the pinning & live unwrapping features to align entire islands the way I wanted.

The body was the most complicated part since making the UV size relatively equal along the head while minimising stretching can be quite difficult. I unwrapped the eyelids and lips separately with projection from view to keep them as close as possible to the actual geometry. Afterwards I sculpted the UVs into shape further and stitched them back to the rest. The body, head & hands each have their own UV map and 1:1 UV space. This is to emulate a UDIM setup, which was not yet supported while making this character. By doing this I can use 3 textures with different resolution on the body mesh to gain more detail. Ultimately this wasn't really necessary for this character since the texturing & shading ended up fairly minimalistic but it's still a commonly used practice for film characters.

The only UVs that are missing in this picture are the eyes & inner mouth objects. You can find more about them in the .blend file from the link above.

hey i have a question, sorry in advance i'm a total beginner here and if you find this question very stupid i'm really sorry about it. so i downloaded the final file, and let's say i want to change some features like, the eye color and shape of hair and other features how do i do it? :(

*@akmalfkr.ig* Well I would ask for some more context. Which file did you download?
Are you trying to change the material or vertex colors of the eyes?
Do you ask on how to change the shape in general or because Blender is not allow you to do it in the specific file?

If you are asking because it's one of your first times opening Blender, then I can recommend the Blender 2.8 Fundamentals tutorials on Youtube, which go over the basics on how to do pretty much anything:
https://www.youtube.com/playlist?list=PLa1F2ddGya_-UvuAqHAksYnB0qL9yWDO6

*@akmalfkr.ig* Sorry if this is frustrating but it's hard to understand what you mean since "open" & "apply" is terminology that means something specific in Blender.

If you want to add colors and adjust them you can assign materials, paint vertex colors or add image texture nodes to the materials to paint on.
The reason why you probably can't move any of the geometry in edit mode is because you are currently modelling one of the Shape Keys, which is set to 0 influence. Switch to the Basis Shape Key for it to work.
If you don't understand what I mean with any of this then I'm not able to help you at the moment.
A beginner course will help you out more than a lengthy back & forth via comments ;)