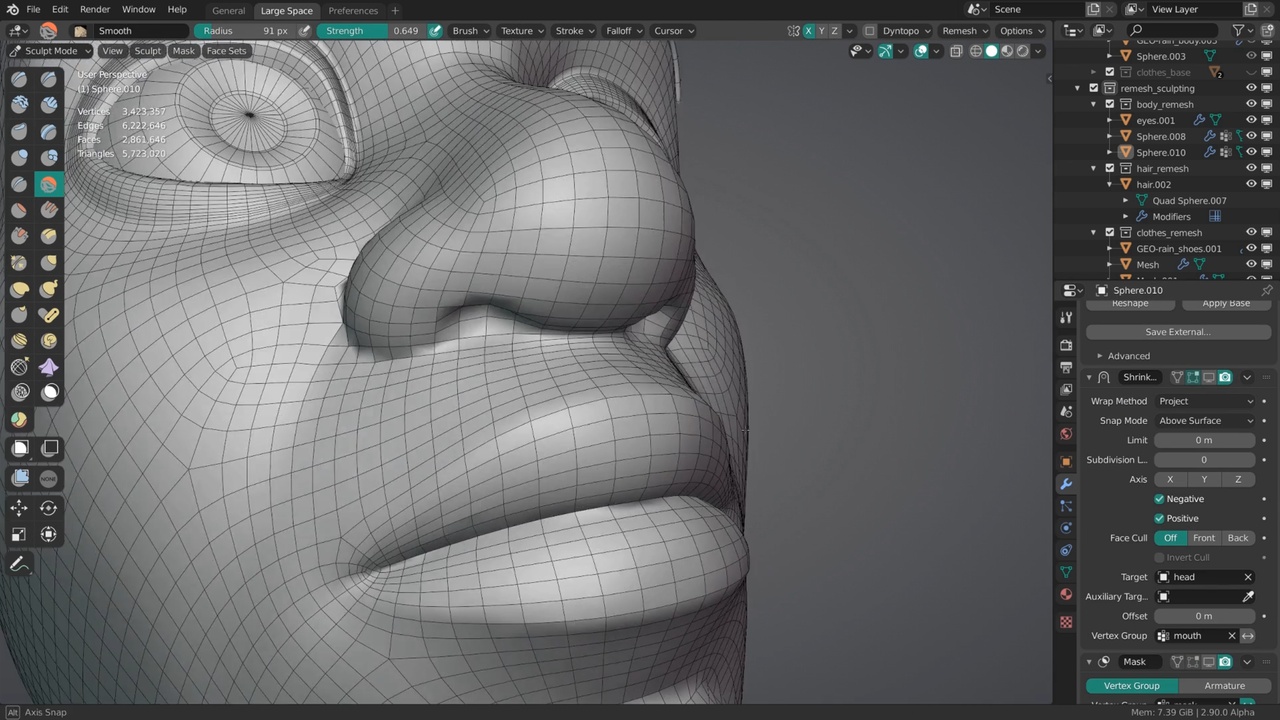 This video is showing a bit of polishing & preparation to start with the expression tests. First off I extracted the sculpted clothing to get the open holes back on the objects. I did this on duplicated objects to keep the original intact. I also duplicated all the body objects that were not remeshed yet for multires sculpting and reorganised everything into collections.

For the quad remesher I tried some different settings and kept adjsuting the seed value to get slightly different results until I had something that worked for me and that I could tweak further. For the arms I instead removed the remeshed parts and just extruded them manually for a cleaner (not twisting) topology. Then I shrinkwrapped it back onto the original sculpt. Luckily the hands are already cleaned up with multires. Just try to get something that roughly looks right, just like what I showed with the manual rain retopology for the expression testing. Some adjustments to fix topology errors can still be made in edit mode and smoothed out in sculpt mode.

With the undercut I had issues since the mesh was too thin for the quad remesher to work. I tried removing the thickness by deleting masked areas but that didn’t work either. The current quad remesher implementation is by far not perfect.

Once I had the main body objects remeshed though I joined and bridged them. For this the resolution on the body can be much lower than the head and hands as long as they connect well. This way you avoid unnecessary density in faces on the body when subdividing the object in multires. If there are poles on the neck try to lead them somewhere where they won’t be too visible instead, like the chest.

For the clothes you can just hide the unneeded face sets, mask everything visible and extract the mask. The extracted geometry can then be quad remeshed for multires sculpting. To project the detail from the original sculpt back onto the remesh I created vertex groups for the head, body & hands to target specific surfaces on the shrinkwrap modifier.

But first I wanted to adjust the facial topology a bit to fit the eyes & mouth better, just like with Rain. I also took the chance to remodel the eyebrows to get them in a cleaner state.

I also still like to add a mask modifier to hide the body under the clothes. Just assign a vertex group to define what geometry should be hidden. I also decided to refine the mouth area a bit more in detail for a better result.

With the data transfer modifier you can get back a lot of the vertex colors again.

But regularly comparing the style of clothing & wrinkles between Rain & Snow is really important But also comparing Snow to the previous rough sculpt is a good practice It makes you progress more visible and maybe ome mistakes that you should move back on Enable outlines to see intersections between objects more clearly if everything is in a uniform color I also just kept changing some of the flow of folds to make them more appealing and natural I was also struggling if I should add wrinkles around the chest and armpits because I didn’t want to exaggerate his muscles accidentally But ultimately I added some stretching folds just enough to not leave the area completely undefined Eventually I even tones those back down I already sculpted in some seams with the Draw Sharp brush but the ones on the shoulders were eventually ironed out more I tried experimenting with the Falloff Curve but that didn’t really go anywhere It’s also good to keep it similar to Rains clothing For the pants it was important to me to this time actually get all the detail in there at this stage When sculpting Rain I left the pockets and shoes very rough and had to figure out the style during retopology Use the freedom of sculpting to get this right. It will be easier For Snows pants I started stylising the folds in a bit of a different way Instead of just leading curved lines into each other as hard edges I also started looping them around For bunching together mass this is super appealing Around the knees I tried not to go too small in detail with the folds Some of them started to get too small scale so I kept simplifying them With smooth stroke it’s then easier to palace a seam across the entire pants I did have x-mirror enabled but since the folds are very asymmetrical I needed to draw a bit more over the other side again Hiding the 2 sides via face sets makes it very easy to place the seam on the inside as well

With some more feedback I went in and created some shapekeys to create some variations. I still felt like he didn’t really quite look like the character from the concept so I wanted to adjust some proportions. It’s just very important that you sculpt on the base resolution if you want to work on the shapekeys. Shapekeys are not supported for the multires subdivisions. I also still tried to remesh the undercut hair so I inflated the sculpt with the mesh filter. Afterwards the result was much better but still needed some extra work in edit mode.

Hi, thanks for the tutorial ! Is quad remesher good for later animation? I'm bored to retopo manually my sculpts, searching a way to get faster and still good result.. any advice for addon, even not free addon? Thanks

@julien.renaudot The quad remesher is sadly not any good for animation. There are some more quad remeshers out there online but they cost a lot more and also won't solve all your problems. For animation ready topology you will need to manually retopologize the model. Some addons like retopoflow can make this more intuitive but it's still going to take effort.